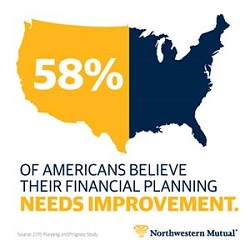 Northwestern Mutual said the findings illustrate the problems consumers still have in making proper plans for their money.

More than 40% of Americans have never spoken with anyone about retirement planning, for example, while 21% have no confidence they have the ability to reach their financial goals.