Winning is about growing, growing is about advocacy, and advocacy is simply about telling your story, keynote speaker and CUNA President/CEO Jim Nussle told attendees. In his first months at CUNA, Nussle has focused on listening to CUNA’s member credit unions. He is determined to refresh and deliver a best-in-class value proposition, with advocacy as the top priority (eLumination May 1). 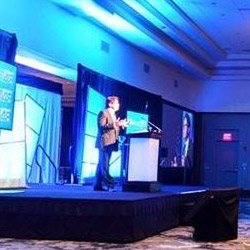 CUNA is exploring new ways to “make the Capitol dome shake” with the demands of the nation’s credit unions seriously considered by members of Congress. If credit unions continually tell their stories--to legislators, to members, to the media, to the public--they will win and grow, Nussle said.

Robert Rutkowski, the new Ohio Division of Financial Institutions’ deputy superintendent for credit unions, promised to take the department’s customer service to “another level.” “Our baseline will be politeness, respect and fair consideration of any request brought before the division,” Rutkowski said. “We’re here to serve you, not make more work for you."

He also noted that helping credit unions to improve fraud prevention would be a priority for the division.

The league also recognized individuals with awards and honors. They include: