Speaking at the Defense Credit Union Council’s Overseas Subcouncil in Dublin, Matz discussed the proposals, as well as a number of other credit union issues.

The changes Matz referred to include those being considered by U.S. Department of Defense (DOD), which would cap military annual percentage rate (APR) at 36%, a number that includes fees.

“We have done the math and found that when fees are included, many credit unions’ short-term loans would exceed the proposed 36% military APR limit,” Matz said.

Matz added that the NCUA established a regulatory framework in 2010 for PALs, which allow federal credit unions to charge an APR up to 28% and an application fee of no more than $20. 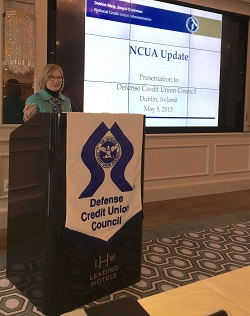 CUNA wrote to the DOD in December saying credit unions should be exempt from the proposal. The letter explained that the credit union products in place provide a consumer service and help steer servicemembers and others away from predatory lenders. CUNA followed up in January with more information about the credit union difference, and, along with the DCUC, met with the Consumer Financial Protection Bureau (CFPB) to push for the exemption.

Further, CUNA cited concerns with the proposal beyond the military APR calculation and cap, including a provision that would drastically change the process for determining whether a potential borrower is covered under Military Lending Act protections. Specifically, the proposed change would require lenders to verify the status of a potential borrower by accessing the DOD's Defense Manpower Data Center database in order to be eligible for the rule’s safe harbor.

NCUA's Matz also mentioned concerns with a recent set of informal proposals from the CFPB that would apply ability-to-repay underwriting requirements to some short-term loans. The bureau is reportedly considering an exemption to this proposal for loans that satisfy the NCUA’s PAL regulation.

The loans would be exempt if under two conditions: the lender verifies the consumer’s income; and the new loan does not result in a borrower having more than two covered longer-term loans from any lender during a six-month period.

Matz also addressed interest rate risk in her DCUC address, saying agency examiners are urging credit unions to shock their balance sheets with interest rate hike assumptions up to 300 basis points, a rate jump that has been predicted by the Federal Reserve’s Federal Open Market Committee as the rate for Fed funds by 2017.