MADISON, Wis. (5/7/15)--An image rebrand was among the highlights noted in the National Credit Union Foundation’s 2014 Impact Report, released Wednesday.

The report, “Strengthening the Financial Well-being of Credit Union Members,” provides insight into the initiatives, programs and grants provided by the foundation over the last year. 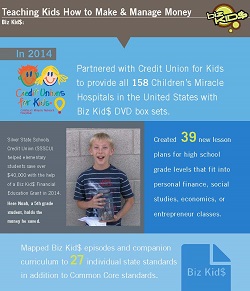 “While we have rebranded our image in the past year, our vision to make financial freedom achievable through credit unions has remained the same,” said Christopher Morris, foundation director of communications. “As you browse the pages of our new report, you can see the progress we’ve made in improving people’s financial lives.”

Among the highlights noted in the report