Data security, Carper bill among topics for CUs' congressional visits

MADISON, Wis. (5/8/15)--Credit unions continue their strong communications campaigns with their elected legislators with meetings in their home states and on Capitol Hill, with an emphasis on data security, regulatory relief and other key credit union issues.

Sen. Tom Carper (D-Del.) recently visited Dover (Del.) FCU, where he was recognized for introducing federal legislation with important protections for consumer data. Dover FCU President/CEO David Clendaniel thanked Carper for his introduction of the Cyber Threat Sharing Act of 2015 (S. 456), which would increase the sharing of cyberthreat data to help combat cyberattacks.

Carper, along with Sen. Roy Blunt (R-Mo.), also introduced the Data Security Act of 2015 (S. 961), which would set standards for entities that handle consumers' personal financial information, while outlining procedures that must be followed in the event of a data breach.

CUNA President/CEO Jim Nussle has called the bill "the best attempt so far at legislation to stop merchant data breaches" and launched a national Action Alert encouraging credit unions and their members to send letters of support for the legislation to their lawmakers in the Senate.

Data and cybersecurity are top advocacy issues for CUNA, state credit union leagues and credit unions that stress merchants must be held to the same standards as financial institutions in protecting consumer data. 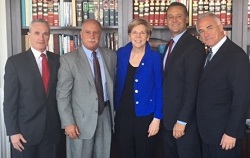 Clendaniel also noted the importance of regulatory relief, also high on the list of credit union advocacy work.  “The credit union industry is in a critical time of regulatory challenges,” he said. “Having Sen. Carper realize the work we do to provide financial stability and security as well as and empower the economic well-being of those within our communities, helps our voice be heard when regulatory changes are being reviewed, which can directly influence the future of our industry.”

Gentile said credit unions need an effective operating environment to fill their important role in helping consumers improve their financial lives. "Sen.  Warren has taken the time to understand our issues and how pending legislation and regulation will affect credit unions," he said.

The group also discussed the Consumer Financial Protection Bureau’s (CFPB) proposed regulations on payday lending and overdraft protection and pointed to the benefits to the economy of bills that would raise the member business lending cap and exempt credit union loans for purchases of one- to four-unit, non-owner occupied residential dwellings from the cap on member business lending.

Credit Union House of Oklahoma, which provides credit unions a training and meeting venue just north of the state capitol,was the site of a recent visit by U.S. Rep. Tom Cole (R-Okla.). Cole made the visit during the House’s recent district work period. Delegates from the Oklahoma City credit unions of FAA CU, Energize CU, Oklahoma Employees CU and Tinker FCU met with Cole (Leaguer May 5).

Among the topics discussed were the credit union not-for-profit tax status, the CFPB and data security.