It is the newest of 20 such relationships overseen by the World Council of Credit Unions. 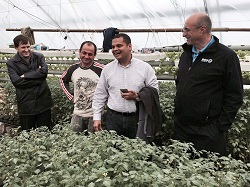 "The two organizations have a great deal of information to share for the mutual benefit and development of more comprehensive and effective member services,” said Brian Branch, World Council president/CEO.

In the new partnership, the Idaho League and World Council seek to provide operational and technical assistance to Moldovan credit union organizations. The assistance may include savings growth strategies, regulatory support and marketing support for bolstering awareness and participation in the credit union movement. The next steps include defining the focus and developing a work plan.

During the weeklong exchange, the Idaho delegation met with CASCA, credit unions and their members, the national regulator and the Rural Finance Corporation, to better understand credit unions' role in Moldova's economic landscape. Meetings took place with rural credit unions, including Onesti-Credit and Rural Credit, the National Commission for Financial Markets and the Ministry of Agriculture.