Member Benefits
Learn more
Learn more about the benefits of membership.
Home » Ind. CUs work with Samaritans good for the sole
CU System

Ind. CUs work with Samaritans good for the sole

INDIANAPOLIS (5/12/15)--As a direct result of the contributions received at its 2014 statewide convention, Indiana’s credit unions partnered with Samaritan’s Feet to distribute more than 1,000 pairs of shoes between October and April.

Credit unions across the state contributed shoes and money to Samaritan’s Feet so that children who need them most could have a new pair of shoes. 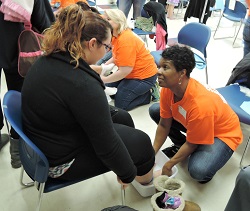 Click image to enlarge. Kimberly Flowers, right, of Financial Center First CU, Indianapolis, washes the feet of a young recipient at the Shepherd Community Center in Indianapolis. Each of the more than 1,000 pairs of shoes in Indiana credit unions’ three distribution events were personally provided to the recipients after their feet were washed by volunteers. (Indiana Credit Union League Photo)

The shoe distribution was held in Indianapolis at the Shepherd Community Center as part of a series of community service events surrounding the men’s NCAA Final Four basketball championship in April.

Credit unions partnered with the Boys and Girls Clubs for two additional shoe distributions. One event was held in Fort Wayne in September; another took place in Marion in January. In addition to collecting the money and shoes, representatives from credit unions across Indiana volunteered at all three events.

“Indiana credit unions have partnered with Samaritan’s Feet since 2010 to provide more than 7,200 pairs of shoes to those who need them most,” said Indiana Credit Union League President John McKenzie. “At each of the distributions, the shoes were personally delivered to each recipient, bringing credit unions’ people-helping people philosophy to life.”

Indiana credit unions will have the opportunity to continue their support of Samaritan’s Feet again this year. The league’s convention committee recently approved the addition of a shoe collection as part of the activities associated with this year’s league convention in October.