Deal signed a third bill concerning Transportation Network Companies (TNC) that unfortunately did not meet the full list of provisions both GCUA and CUNA would like to see in TNC legislation. 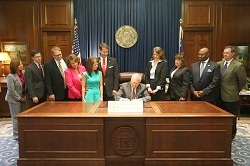 The bills with credit union support included one regarding interest on trust accounts for real estate agents--made possible by the Credit Union Share Insurance Fund Parity Act--and one that adds parity for state-chartered financial institutions to their federal counterparts.

“During the 40-day state legislative session, of the 2,400-plus bills and resolutions introduced in Georgia, there were more than 200 pieces of legislation that required active lobbying and work by credit union lobbyists,” GCUA said. “Three credit union priority bills were successfully lobbied across the finish line and signed into law.”

The Credit Union Share Insurance Fund Parity Act, signed by President Barack Obama last year, enabled the National Credit Union Administration to extend insurance coverage to trust and other similar accounts to credit unions. GCUA said that there was a need to amend the law in Georgia to allow credit unions specifically to offer these types of accounts to real estate agents.

Finally, the TNC bill, authored by Rep. Rich Golick (R-Smyrna), will implement insurance standards for TNC, or ride-share companies such as Uber and Lyft. However, it did not meet the full list of provisions CUNA would like to see in TNC legislation.

While the bill requires ride-share companies to notify drivers that they may be in violation of their loan agreement, it does not mandate that TNC drivers provide proof to lienholders and TNCs that they have obtained comprehensive and collision insurance, which would provide the appropriate amount of coverage. CUNA strongly advocates for these additional measures.