WASHINGTON (5/12/15)--Jim Nussle’s background as a key policymaker in both trade policy and politics came to the forefront Monday as he participated in a wide-ranging interview on CNBC’s Squawk Box Monday. Nussle now is president and CEO of CUNA.

Nussle discussed trade policy and the 2016 elections with anchor Joe Kernan and Jared Bernstein of the Center for Budget and Policy Priorities. 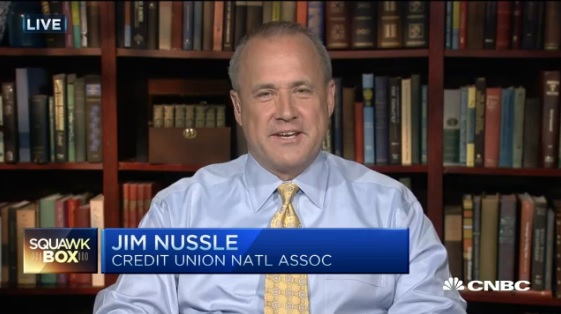 Nussle served as a U.S. representative from Iowa from 1991 to 2007, including six years as the chair of the House Committee on the Budget. He was the director of the White House Office of Management and Budget from 2007 to 2009.

As the leader of CUNA, Nussle has been a strong advocate for preserving the credit union tax status, attaining regulatory relief for credit unions and promoting strong national data protection standards for entities handling consumer information.