The Federal Adjustment in Reporting (FAIR) Student Credit Act would enable a borrower who has successfully completed a series of on-time payments to remove the student loan default from their credit report. The program doesn’t forgive debt--it gives borrowers of private student loans the same ability to rehabilitate their credit as they could with federal student loans. 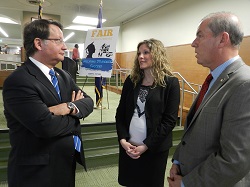 “It’s really meant to be a second chance,” Peters said (The Detroit News May 11).

Adams said the change would allow credit unions to work with people who otherwise wouldn’t be eligible for loans, according to the league newsletter Monitor (May 12). Because of the defaults’ effect on credit scores, many private student loan borrowers find themselves unable to get a credit card, car loan or even rent an apartment.

“Having customers with good credit is not only good for lenders, it’s good for Michigan’s economy,” Adams said in a statement. “When we can lend to more customers with good credit, then more Michiganders are able to buy a home, get a new car, start a business or save for retirement. It’s great to see Senator Peters taking the lead on this important legislation to help people get back on strong financial footing after default for future borrowing and repayment.”