Letters pay off for CU employee on ‘Wheel of Fortune’

LIVONIA, Mich. (5/15/15)--Zeal CU employee Jeremy Cybulski may have come away with a grand total of $64,348 during his recent appearance on “Wheel of Fortune,” but youth financial literacy also was a winner.

Cybulski, who is the youth and community development coordinator at the Livonia, Mich.-based credit union, filmed the episode March 13, and it aired Wednesday. 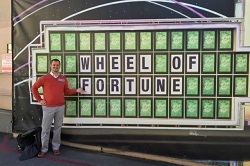 As a way to raise funds for National Youth Involvement Board (NYIB) financial education programs, a “Wheel of Fortune” pool was created. Supporters could donate $5 per guess of what Cybulski’s winnings would be, with half the pot going to NYIB and half going to the winner.

“Our goal was $1,000,” he told News Now. “But we raised $605 which is great--half will go to the winner and half will go to NYIB. That’s half a scholarship for someone to go to the annual conference.” The conference is set for 29-31 in San Antonio, Texas.

Cybulski spun out with “bankrupt” twice. He then won three toss-up games, then the second, third and fourth puzzles, winning $24,348 including a trip to Ireland. In the bonus round, he guessed the final phrase, “Phased out,” for $40,000.

“I’m glad I was able to leverage my experience to help an organization that means so much to me,” Cybulski said. “Why should I be the only winner?”