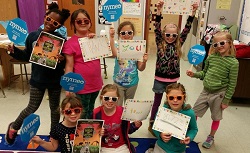 The event, which aims to imbue positive savings behavior in school-age children, is open to all youth under the age of 18. CUNA has organized the challenge since 2004, and it has lasted the full month of April since 2009.

“From the tiniest to the largest credit unions, from one coast to the other, we heard from you all through photos and tweets,” said Joanne Sepich, CUNA director of consumer education. “And what a thrill it was to watch lobbies turn into jungles and tellers turn into safari guides.”

Meanwhile, CUNA also has randomly selected 25 participating credit unions to receive $100, which they will then in turn give to a participating member of the challenge.

“Through the generous support of GreenPath Debt Solutions, 25 of these young savers will have an extra $100 in their accounts,” Sepich said. “Credit unions are succeeding at sending the message that you’re never too young to save. One of our winners is just 9 months old (Good job, Juliana’s parents).”