Should the Fed Raise Interest Rates?

By maintaining near-zero interest rates, is the Federal Reserve helping or hampering the economy?

That question served as the basis for a stimulating one-hour debate between economists Mike Schenk of CUNA and Steve Rick of CUNA Mutual Group on the final day of the CUNA CFO Council Conference in New Orleans.

Leaning heavily on a narrative indicating underlying “bifurcation” of the economy, and particularly weakness in construction and manufacturing sectors of the labor market, Schenk argued during his share of the point-counterpoint presentation that the Fed should stay the course, pushing off any interest-rate increase until 2017.

An increasing interest-rate environment sows the seeds for a recession,” Schenk says.

“Extreme caution is the rule of the day here, especially because the economy remains extremely weak, because labor markets have a long way to go, and incomes have not been increasing.

“We’re on the cusp of doing something great, but we're not there yet,” he adds. “We need more time.”

Conversely, Rick advocated for the Fed to begin a gradual rise in interest rates later this year.

“We’re in a sweet spot. It’s time to stop manipulating the price of money,” says Rick, who sprinkled references to Nobel Prize-winning economist Milton Friedman and Greek philosopher Socrates. “We don’t need zero emergency interest rates any more. This economy can stand on its own.” 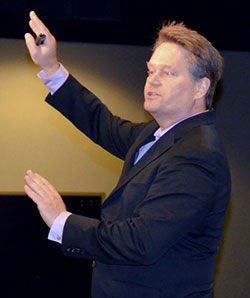 Underemployment approaches 11%, which is 1.5 percentage points higher than historical norms. Unemployment duration stands at 30 weeks, roughly double the long-term average. Manufacturing and construction are down 2.5 million jobs, indicative of an economy that is adding high-paying and low-paying positions but not many middle-class jobs. Median household income, adjusted for inflation, stands at 1997 levels.

Those statistics contribute to Americans’ skepticism about the economy. Nearly 60% believe the American Dream is dead, Schenk says, citing a CNN poll, and 49% of millennials report they’re underemployed or working a job that doesn’t require a college degree.

“So the data looks good for headlines, but it’s not so good when you dig a little deeper,” Schenk says.

Countered Rick: “I don’t believe in surveys, and 90% of Americans agree with me.”

Waiting to reach full employment—which could take up to two years—would inflict inflationary pressure on the economy, Rick says.

“Let’s go to 1% or 2%,” Rick says. “Even that would be incredibly stimulative. And it’ll do no damage to the job market.”

The current monetary policy is “actually punishing capitalists for saving money and lending it out,” Rick adds. Banks don’t want to lend at these low interest rates, and businesses don’t want to borrow, sure signs that “we’re in a classic liquidity trap.”

When the money supply grows faster than the gross domestic product, you get inflation, Rick says, citing a Friedman theory: “Inflation is everywhere and always a monetary phenomenon.”

“That’s an interesting quote," says Schenk. "It would be really great if it was true.”

In fact, data indicates a negative relationship between the growth of the money supply and an increase in prices, he says.

“It’s true that banks and credit unions aren’t lending as much as they possibly could,” Schenk says. “I’d argue the reason is you aren’t sending strong signals that you’ll keep interest rates low for a long enough time to carry through the recovery.”

The Fed would send a strong signal by guaranteeing a commitment to near-zero rates through a certain date, according to Schenk. “Then decision makers can make decisions. Why load up my balance sheet with long-term loans if rates are going up in a couple months?”

The free market should decide rates, Rick said, because the army of economists at the Fed doesn’t have a crystal ball. He quoted Socrates: “I only know that I know nothing.”

“Let supply and demand work,” Rick says. “Let the price of money be determined by me, you, the world--instead of 12 individuals sitting in Washington, D.C.”

Trust in the free market led to the Great Depression, Schenk says, arguing it’s the government’s responsibility to tinker with interest rates to best protect its citizens.