CUs Slowly Migrating to EMV Standard

For many CUs, the race to EMV compliance is more marathon than sprint.

For many credit unions, the race to EMV compliance is more marathon than sprint.

Only 38% of credit unions expect their credit card programs to comply with the Europay, MasterCard, and Visa (EMV) chip card standard by the Oct. 1 liability transfer date, according to CUNA’s 2015 Credit Card Survey results.

Moreover, 36% of credit unions don’t anticipate full EMV functionality until at least the end of 2016. 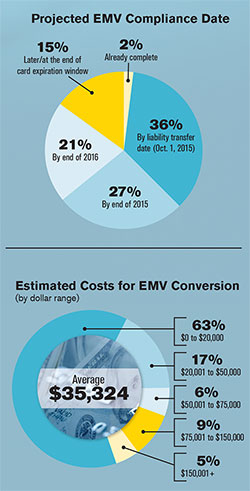 In October, Visa and MasterCard will shift responsibility for losses in domestic point-of-sale transactions to the “least secure” entity—for example, card issuers if the merchant device is EMV-compliant and issuers’ cards aren’t.

Nearly six in 10 credit unions will rely on a rolling reissue as magnetic stripe cards expire, while 27% elect for a complete, simultaneous reissue. Only 7% of credit unions have no plans to convert to EMV.

Credit unions cite as chief obstacles to EMV conversion the investment costs, as well as a lack of time and expertise to execute the switch.

Secondary concerns include difficulty or delay in negotiating with card processors, training staff on EMV reissue plans and card use, and anticipating members’ demand for enhanced card security.

On average, credit unions budget $35,000 for the conversion. But that figure escalates to nearly $120,000 among credit unions with more than $500 million in assets.

Credit unions are split on whether EMV technology—which features an embedded microprocessor chip that authenticates the credit card during a transaction—will significantly reduce fraud in point-of-sale transactions.

Only 47% of respondents indicate they’re “highly” or “somewhat” confident EMV will diminish fraud losses, while 24% say they’re “not very” or “not at all” confident.

The vast majority (88%) of credit unions will adopt a “contact” EMV credit card, which requires consumers to “dip” their cards into a terminal to execute a transaction, as opposed to a “contactless” process where consumers wave a card over a terminal.