How do you breathe new life into a stagnant credit card rewards program? Elevations Credit Union asked its cardholders.

“Our members are not shy,” says Gary Kindle, senior vice president of operations for the $1.5 billion asset credit union in Boulder, Colo. “They tell us what they think, what they want, and what they don’t like. I think we’re getting better at listening to them.” 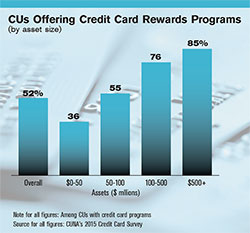 These findings can generate discussions about promoting innovation in your card offerings, regardless of your organization’s size and resources.

Consumers’ use of plastic continues to rise, a sign of the growing economy and the increase in merchants and automated terminals that accept credit cards.

Outstanding credit card debt for all credit unions stood at $46.5 million as of year-end 2014, a 7.9% increase over the previous year, according to CUNA’s economics and statistics department. That’s the largest jump since 2007, before consumers began to feel the full weight of the recession.

“Consumer balance sheets are in a better spot today than they’ve been in a long time,” says Mike Schenk, CUNA’s vice president of economics and statistics. “Because there’s a lot of pent-up demand in the marketplace, we expect loan growth to continue across all seven of the major portfolios we track, including credit cards.” 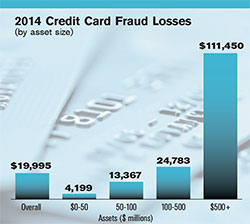 Interest rates. Credit unions charge an average annual percentage rate (APR) of 10.2% on the credit cards used by the majority of their members.

That compares with the national credit card average rates cited by the Federal Reserve (13.68%) and Bankrate.com (13.02%) for fixed-rate cards, and 15.82% for variable-rate cards.

“If members were to pay off the average estimated U.S. household credit balance of $7,200 in three years with a credit union card, you would save $436 in interest charges,” says Perc Pineda, CUNA senior economist. “That’s a differentiator you can market to consumers— and especially young adults, the most likely age demographic to carry over monthly balances.”

The median late-payment fee is $20 in credit unions that offer classic programs, and $25 in those that offer gold and platinum or titanium programs. For all three types of programs, the most common fee is $25.

Among the 15% of credit unions that charge balance transfer fees, the average is 2%.

Cash-back benefits. About 19% of all credit unions offer this perk as part of their rewards program. That figure rises to 60% among credit unions with at least $500 million in assets.

The overall average cash-back percentage on purchases is 1.3%.

Credit-building programs. About one-third of responding credit unions overall—and 48% of large credit unions—offer this program. The average credit limit on these cards is $1,146, with nearly equal percentages of programs carrying a $500 maximum or a maximum up to $2,000.

Fraud losses. Credit unions estimated their fraud losses at nearly $20,000, on average, in 2014. Card experts agree it’s not yet clear how much EMV will reduce fraud at the point of sale in the U.S.

But it’s likely at least some fraud will shift to card-not-present transactions, based on EMV conversions elsewhere.