WESTBROOK, Maine (5/26/15)--U.S. Rep. Bruce Poliquin (R-Maine) told credit union leaders his job was "to help create an environment where you can do what you do best--serve your members,” during the lawmaker’s keynote address at the Maine Credit Union League’s annual meeting and convention earlier this month.

Poliquin, who serves on the House Financial Services Committee, said he is dedicated to reducing the regulatory burden credit unions face (Weekly Update May 21). 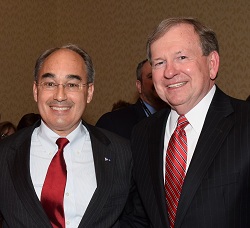 “I am supportive of common-sense regulation that has the oversight of Congress but agencies that are unchecked in writing and implementing arbitrary regulations that do not help credit unions and other financial institutions concern me,” Poliquin said. “Credit unions play a key role in Maine and, as a member of the House Financial Services Committee, I will advocate to reduce the burden that impedes with that role."

The league also recognized its annual award winners during the conference. Awards and honorees included: