CUs remain a leader in customer service, trust: Temkin

WABAN, Mass. (5/27/15)--What’s better than a credit union? Practically nothing, according to the results of the 2015 Temkin Customer Service Ratings and Trust surveys.

In terms of trust, consumers rated credit unions higher than any other business or organization, sharing the top spot with the H-E-B supermarket chain. 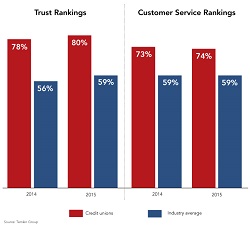 The survey asked roughly 10,000 consumers to identify and rate companies they had interacted with during the previous 60 days.

As for customer service, consumers rated credit unions third, after Chick-fil-A and USAA, which took the top spot for the third straight year. Credit unions shared the third spot with the grocery store chains Aldi and Trader Joe’s.

Financial institutions rated third as an industry overall for customer service, posting a score below 60%. With a 74%, credit unions helped push higher that final total, while the top-rated bank, Sun Trust Bank, scored a 67%.

You Are 1 in 100 Million Drive-Up Envelope