CARPINTERIA, Calif. (5/28/15)--When consumers reach into their wallets to make purchases at retail stores nationwide, more often than not they’re reaching for credit cards.

According to a recent report from Nilson, credit cards expanded their market share in purchase volume in 2014 to 53.59%, up from 52.95% the prior year. 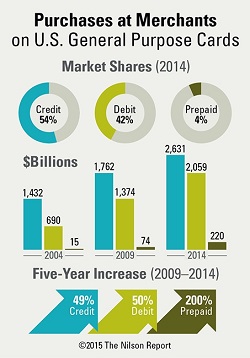 Debit card use, meanwhile, accounted for 42% of the market share, while prepaid cards comprised 4% (Pymnts.com May 27).

While credit cards continue to hold a majority of the market, however, it’s actually prepaid cards that have seen the highest rate of growth.

Spending with credit cards and debit cards has climbed 49% and 50% respectively between 2009 and 2014, while prepaid card spending jumped 200% over that stretch.

Further, while the market share owned by credit cards sat higher on an annual basis in 2014, it’s far lower than the peak seen in 2004 of roughly 67% (Pymnts.com).