ICU Day is celebrated annually on the third Thursday of October and will take place this year on Oct. 15. 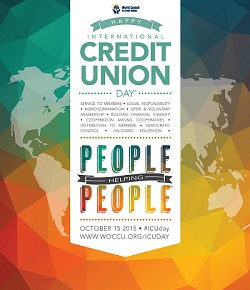 "Every day credit unions make an incredible difference in the lives of their members," said Jim Nussle, CUNA president/CEO. "ICU Day celebrates the power of our movement, our dedication to the cooperative principles, and commitment to serve the best interests of the more than 100 million credit union members in the United States."

Earlier this year, World Council solicited theme ideas from its member organizations and the public. Out of 30 submissions, several U.S. credit unions suggested variations of this year's chosen message including:

Since appearing in several past ICU Day themes from the 1960s and 1980s, the phrase's meaning has stood the test of time. By adding a modern and colorful design, ICU Day celebrations this year have the potential to raise awareness of credit union benefits and ultimately attract more members worldwide--contributing to World Council's goal of adding 50 million new members by the year 2020.