Zombie foreclosures creep higher in half of U.S. metros

WASHINGTON (6/12/15)--Despite a recent downward trend, homeowner-vacated or “zombie” foreclosures have risen in half of U.S. metro areas, according to RealtyTrac. 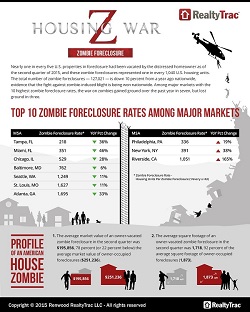 On a positive note, zombie foreclosures nationwide have fallen 10% on a year-over-year basis to 127,021 units as of the end of the second quarter.

Zombie foreclosures now represent one in five of all U.S. properties in foreclosure.

In New York, Bethpage (N.Y.) FCU, was picked as one of 11 financial institutions in the state that will help Gov. Andrew Cuomo clean up neighborhood blight caused by zombie properties.

As part of its involvement, Bethpage will regularly inspect properties that fall into delinquency and determine whether they are being properly maintained or if they have been abandoned (News Now May 20).