FARMERS BRANCH, Texas (6/15/15)--A number of credit union professionals did their part recently to lend a hand to those affected by the massive flooding that hit Oklahoma and Texas last month. 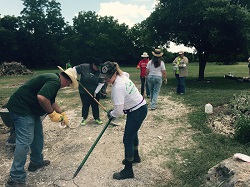 More than 400 homes in that area were damaged as a result of the Blanco River rising more than 28 feet in less than two hours.

“It’s been nearly three weeks since the flooding, however all of the volunteers from our group were stunned at the extent of the damage,” said Ashley Harris, board president of the Alamo Chapter of Credit Unions (Leaguer). “The cleanup will continue for months and we encourage anyone who is able to not only volunteer their time, but to also patronize the local stores in order to support the community economically as well.”

Volunteers helped a local elderly couple clean up their home, which at one point was submerged in more than 12 feet of water. They escaped the flood by climbing up to their attic.

The Alamo Chapter held a second cleanup day later in the week as well.