Other CUs part of disaster ‘Plan C’ after building collapse

PIEDMONT, S.C. (6/16/15)--Individuals and organizations are often defined in challenging moments. Through the spirit of cooperation, three South Carolina credit unions have seized a challenge to weather an unforeseen disaster.

On June 9, a portion of the roof of the GE Aviation plant in Piedmont, S.C., collapsed. None of the 65 employees on duty were harmed. However, a branch of Greenville, S.C.-based Turbine FCU that was housed along the side of the building was forced to temporarily close. 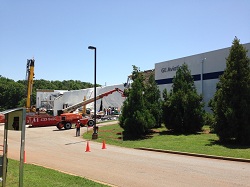 Click image to enlarge. On June 9, a portion of the roof of the GE Aviation plant in Piedmont, S.C., collapsed, forcing the closure of a branch of Greenville, S.C.-based Turbine FCU that was housed along the side of the building. (Turbine FCU Photo)

Turbine’s disaster recovery plan called for the credit union to operate out of its headquarters in the event an emergency shut down the branch. However, the main office is located inside another GE plant--one that has been scheduled for mandatory shutdown from June 29 to July 3.

When Turbine FCU’s temporarily closes the affected branches later this month, the credit union will occupy space at a branch of Carolina Foothills FCU, Spartanburg, S.C. “They’ve provided us with a teller station and office space, and their information technology folks have already helped us,” Kerri Smith, Turbine FCU business development and marketing manager, told News Now. “Richard Weaver (Carolina Foothills CEO) and his team have been awesome through this whole ordeal.”

“The silver lining is that this could have been so much worse,” Smith said. “No one was hurt, and we’ve discovered that we have a Plan C for our disaster recovery program.”

The Turbine FCU leadership team also has approved an emergency loan with no credit requirements for the employees at the aviation plant where the structural damage occurred. Members with existing loans will receive a 90-day extension, Smith said.

“The plant manager said, ‘We love our credit union. Please hang in there with us. We need you guys,’” Smith said.