CUs care to wear red with new Cornerstone campaign

The goal of the awareness campaign--identified by the red T-shirts the league has created--is to show community members that credit unions aren’t just financial institutions, but also community partners (Leaguer June 16). 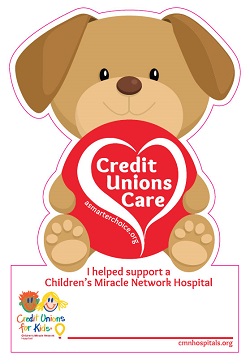 The campaign runs through Aug. 31. Perhaps the most notable way to demonstrate this idea is through stepping up efforts to raise funds for Children’s Miracle Network (CMN) Hospitals alongside Credit Union for Kids.

Through the Credit Unions Care campaign, the league is providing paper donation dogs to credit unions and asking that credit unions invite members to donate. When a member donates $1, he or she can write her name on the paper dog and have it displayed in the credit union’s branch.

All proceeds from the donation dogs effort will go toward CMN Hospitals. In turn, CMN Hospitals will donate 10% of funds raised to the Cornerstone Credit Union Foundation;