ALBUQUERQUE, N.M. (6/18/15)--To some, the Credit Union Association of New Mexico’s (CUANM) annual meeting, held earlier this month, may have served as a birds-eye-view snapshot of the state of the New Mexico credit union movement.

CUANM took that idea literally, however, when the league took a group photo of those who attended the event with an airborne drone. 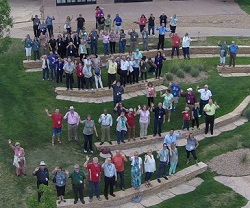 Attendees of the Credit Union Association of New Mexico's annual meeting gathered outside for a photo, taken by a drone. (CUANM Photo)

“We used modern technology to capture pictures and video of our convention group using a drone,” said Paul Stull, CUANM president/CEO, who said the drone photo was a first for a league. “It was the perfect way to represent our Picture of Success convention theme.”

Fitzgerald was honored during the convention with a plaque commemorating his years of service. Among his accomplishments, Fitzgerald led a campaign to raise $1 million for a local children’s hospital and the search for a new league president/CEO.