PROVIDENCE, R.I. (6/23/15)--Navigant CU, Smithfield, R.I., was named the No. 1 large company to work for in Rhode Island by Providence Business News.

Of any Rhode Island business with 150 to 499 employees, Navigant was rated at the top. Providence Business News wrote that that all 260 employees believe that their employer values family over work. 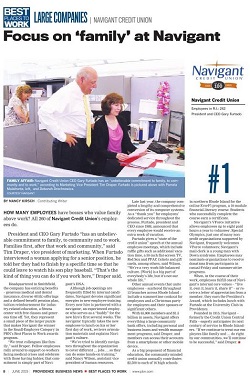 "Our business was established 100 years ago on the foundation of treating our employees as family. Our family has grown exponentially, but our values remain unchanged," Furtado said (Daily CU Scan June 19).

Two other credit unions were among the state’s best places to work, according to Best Companies Group, which researches and recognizes employers through employee feedback.

Pawtucket (R.I.) CU was ranked seventh in the large-companies category. The three ideas that best describe its staff were “teammates, hard-working, the future of (the credit union),” Vice President of Human Resources Anne Bernier told the publication.

The People’s CU, Middleton, came in at No. 6 in the mid-sized companies category, which covers businesses with 50 to 149 employees. President/CEO Ellen Ford said new employees have lunch meetings with her and the vice president of human resources to get feedback on the hiring experience.