Credit unions aim to win the hearts and minds—as well as the stomachs—of consumers in Denver this month through a pair of promotional efforts during the America’s Credit Union/World Credit Union Conference.

The theme of these events is “People Helping People,” which aligns with this year’s theme for International Credit Union Day, Oct. 15. 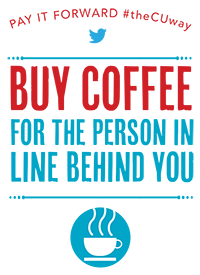 First, CUNA will mail attendees a deck of dual-purpose tear-off cards they can distribute to people on their way to the July 12-15 event.

On one side, the cards feature credit union awareness factoids such as the roughly $7.1 billion credit unions saved consumers in 2014 through lower fees and better rates, as well as competition in the marketplace that also translates to savings for bank customers.

On the flip side, the cards urge a gesture of goodwill, such as “Buy coffee for the person in line behind you.”

The cards feature the hashtag #theCUway, which the Kansas Credit Union Association coined as part of its highly successful statewide awareness and community service efforts.

Then, on July 14 at the height of the conference, CUNA will sponsor a local Denver food truck that will serve as an edible billboard for credit unions.

On average, more than 2,000 area residents attend the roundup, which is produced by the nonprofit Civic Center Conservancy along with local community sponsors.

Hungry grazers can choose one of three taco options at Mike’s 2 Kitchen truck, which will feature credit union signs and banners. The tacos will be wrapped with branded napkins that say, “brought to you by America’s Credit Unions.”

The napkins will direct consumers to aSmarterChoice.org, where they can learn how credit unions are different from banks and find a credit union to join.

To further communicate the message to members and nonmembers at Civic Center EATs, staff from CUNA and the Mountain West Credit Union Association will be on hand to answer attendees’ questions, address comments, and explain the credit union difference.

This food truck event follows on the heels of a similar event on Capitol Hill during CUNA’s Governmental Affairs Conference (GAC).

The towering story walls—which have become a fixture at the GAC and America’s Credit Union Conference—measure 8 feet by 12 feet, displaying 40 stories on each side, again under the “People Helping People” banner.