MADISON, Wis. (6/25/15)--The Cooperative Hall of Fame welcomed four inductees this year, including Ann Hoyt, board member at UW CU.

Hoyt, a former professor at the University of Wisconsin-Madison, has been an elected board member at the Madison, Wis., credit union since 1994. She launched the Cooperative Management Institute, an intensive education program for food cooperative managers, at the university. 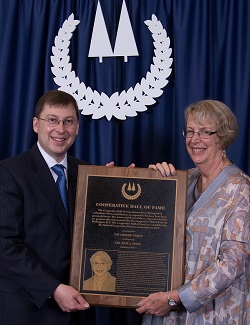 “This induction is the highest honor that the community bestows and I am committed to continuing my efforts to ensure meaningful and lasting impact for cooperatives worldwide,” Hoyt said, adding, “I am especially proud of my work on the UW Credit Union board of directors.”