WASHINGTON (6/25/15)--The Cornerstone Credit Union League and its members took “Hiking the Hill” to the next level this year, dedicating a full day to meet with regulatory agencies, which allowed credit union representatives to meet with several of the most prominent financial regulators in Washington, D.C. 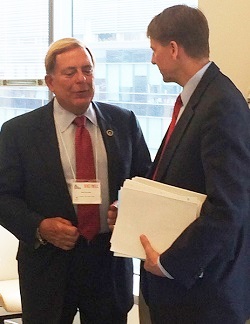 “This first-ever effort by Cornerstone is an extraordinary opportunity to visit with regulators to voice the thoughts and concerns of credit union leaders,” said Suzanne Yashewski, Cornerstone senior vice president/regulatory compliance counsel (Leaguer). “We hope the meetings can positively influence CFPB’s soon-to-be proposal on courtesy pay to ensure that such programs remain a viable option to serve credit unions’ needs as well as to generate income.”

Among other issues, the league discussed overdraft protection and the distinctions between how credit unions offer the service to members compared with how other financial institutions offer it.

Cornerstone also explained that credit unions are consumer advocates first, and as such, any CFPB regulations should not hamper their ability to serve members and provide them with quality products and services, according to Elizabeth Eurgubian, CUNA deputy chief advocacy officer.

Cornerstone representatives also asked Cordray to urge the CFPB to look at the cumulative effect of the regulations the agency hands down, especially on smaller credit unions.

On Wednesday, credit union advocates met with legislators, including House Financial Services Chair Jeb Hensarling (R-Texas) and his staff, to discuss issues of importance to the movement, such as the impact of data breaches and the challenges of complying with regulations passed down from regulatory agencies such as the CFPB.

“Credit union advocates did an excellent job of articulating the impact of merchant data breaches on their members and the need to enact meaningful legislation to hold merchants accountable for protecting consumer data,” said Jim Phelps, Cornerstone senior vice president of advocacy.