Sens. Murphy, Blumenthal express support of CUs at Conn. GAC

Both Sens. Chris Murphy (D) and Richard Blumenthal (D) joined the group, and Murphy called credit unions “the best face of banking that the industry at large could imagine” (Weekly Update June 30). 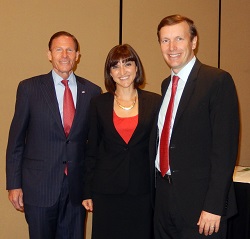 The senators were only a few of the many lawmakers in attendance.

U.S. Rep. John Larson (D-East Hartford) reminded attendees that credit unions must remain vigilant in their efforts to increase lawmakers' understanding of the importance of credit unions to their communities.

State Rep. Eric Berthel (R-Watertown), an employee of Hartford (Conn.) Healthcare FCU, gave attendees a glimpse of his first year in the Legislature, while also touching on the recent passage of a bill that ramps up financial literacy in schools.

“Advocacy efforts like this conference are critical to our mission to remove barriers that allow credit unions to better serve their members,” said Jill Nowacki, league president/CEO. “The league and our credit unions are incredibly appreciative to all the elected officials and speakers who shared their time with us.”

Department of Banking Commissioner Jorge Perez also spoke at the conference and said he supported the credit union movement. He also touched on two bills that could affect credit unions, including one that requires regulation of virtual currency and the other that focuses on student loan services.