WASHINGTON (7/1/15)--The need for regulatory relief--a continuing concern for credit unions and one National Credit Union Administration Chair Debbie Matz emphasized recently--was a key topic for Indiana credit unions during their May visit with the regulatory agency. 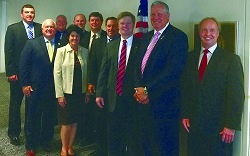 "Between this trip and the CUNA (Governmental Affairs Conference) hill visits in early March, we have met face-to-face with nine of the 11 members of Indiana's congressional delegation plus the NCUA board," McKenzie noted.

The meeting with Donnelly coincided with the introduction of his bill to provide privately insured credit unions with access to the Federal Home Loan Bank system (S.B. 1367). The league has been working with him and his staff on the bill since February.

The visit with the senator also was within a few days of the Senate Banking Committee markup of regulatory relief legislation. Donnelly, a member of the committee, played a key role in supporting provisions favorable to credit unions, the league noted.