WESTBROOK, Maine (7/2/15)--The Maine Credit Union League (MCUL) recently offered credit union employees exposure to the political process--an experience one participant likened to going backstage at a concert--through its "Job Shadow a Legislator" program at the State House in Augusta.

“From the outside, this process seems slow and archaic; however, the amount of time and thoughtful conversations that go into each bill was truly an eye-opener for me,” said Sandy Cloutier, chief operating officer, Infinity FCU, Westbrook, Maine, who spent the day with Rep. Mike Shaw (D-Standis) (News and Views July 1). 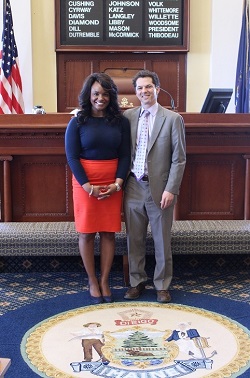 “This is where the state political process happens so we encourage people to come and see it in action,” said Jon Paradise, MCUL vice president of governmental and public affairs.

“When new credit union officials participate, it further strengthens our level of political involvement because it brings new faces to Augusta,” Paradise said. “We were successful in engaging lots of new people this session, which was nice to see.”

Alicia Roberts, executive assistant at cPort CU, followed Senate Minority Leader Justin Alfond (D-Portland) and found the day “invaluable." She said, "It was great to have the opportunity to con­nect with our legislators and gain insight into what happens at the State House.”

The long-term benefits of building relationships and gaining a better understanding of how the legislative process works, and the importance of advocacy was a common theme of job shadow participants.

“Building bridges and com­mon ground with our legislators is so important as they look to make informed decisions in the future,” said JoAnn Bisson, president/CEO of Trademark FCU, Augusta. “Being comfortable in reaching out to them and vice versa is a strong way to ensure that our message will be heard and respected.”