WASHINGTON (7/7/15)--CUNA and the Illinois Credit Union League (ICUL) have put their support behind Darin LaHood, who will face off against other Republicans today in a special election primary.

The primary, and subsequent special election, will fill the seat of former Rep. Aaron Schock (R-Ill.), who resigned in March.

LaHood, a current state senator, has been a longtime credit union supporter while serving in the state General Assembly, and has a demonstrated track record of supporting credit union issues. 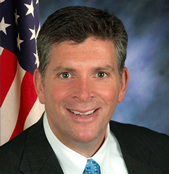 “During a recent candidate interview with local credit union management officials, LaHood expressed his strong support of maintaining the tax exempt status of credit unions and his desire to reduce regulatory burdens on the credit union industry,” said Keith Sias, ICUL vice president of government affairs. “As a credit union member, we believe that Darin LaHood will be a strong advocate for credit unions as a member of Congress.”

Today LaHood will face off against Donald Rients and Mike Flynn in the Republican primary, while there are two candidates in the Democratic primary. The special election will take place Sept. 10.