The Foundation's event included a surprise challenge--and a fund-raising component. 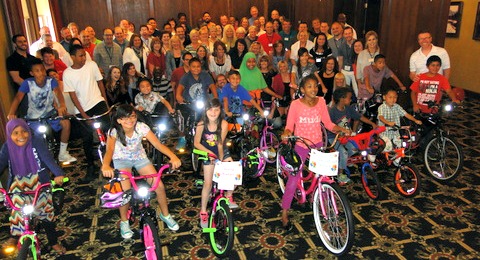 A number of Denver children show off the new bicycles that Credit Union Development Educators assembled in a surprise assignment during their annual workshop. (Photos by Mark Lynch)

Thanks to the ingenuity and craftsmanship of some Credit Union Development Educators (CUDE), several Denver youth are now proud owners of new bicycles.

Five-member teams were given two hours to figure out how to assemble bicycles from scratch—and to raise $200 apiece to cover part of the cost of the bikes. The exercise tested the CUDEs’ ability to communicate and find creative solutions, and to define responsibilities such as project management, mechanical assembly, and fund raising.

Many groups turned to social media to raise money to pay for their bikes, while some dialed family and friends, who then made donations over the phone with their credit cards.

After the CUDEs completed building their bicycles, they decorated the final products with balloons and signs bearing the names of the children who were to receive the bikes. They were then told the bikes would be donated to The Bridge Project, an organization that aims to provide educational opportunities for children living in Denver's public housing neighborhoods so they graduate from high school, attend college, or learn a trade.

The CUDEs thought that was the end of their exercise.

But the next day, the Bridge Project came to speak to the CUDEs at the workshop about their organization. They revealed that the CUDEs would have the opportunity to meet the children who inspired this project. The kids arrived and were overwhelmed with joy when they found the bikes the CUDEs had worked hard to assemble and decorate for them. It was an emotional day for everyone involved.

Participants donated all the tools used for building the bicycles to the Bridge Project to repair broken bikes in the Denver area.