WASHINGTON (7/14/15)--A program aimed at creating access to affordable housing in Haiti has been awarded to the World Council of Credit Unions by the U.S. Agency for International Development (USAID).

USAID and the World Council, along with Habitat for Humanity International and the Affordable Housing Institute, will use HOME to work directly with Haitian financial institutions and housing developers to strengthen and create affordable housing products and services.

The goal is to make the program a Haitian-led and owned initiative. The World Council was awarded the program last week. 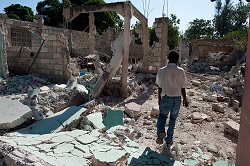 Click image to enlarge. Haitian neighborhoods, especially in the capital Port-au-Prince, suffered significant damage from the 2010 earthquake. The shortage of affordable housing in Haiti is still a major concern more than five years later. (World Council of Credit Unions Photo)

"World Council and its partners are excited to spur the development of innovative housing finance products for low and middle income Haitians, who previously had little to no access to affordable housing," said Peter Graves, World Council senior vice president of technical services.

Following the 2010 earthquake, the American and Haitian governments developed a housing strategy to build short-term shelters and longer-term homes. Now they will use the lessons learned to find a sustainable solution to the affordable housing shortage in Haiti.

The World Council has been involved with Haiti since 2009, when it began helping Haitian financial institutions expand access to agricultural and rural financial support through USAID programs.