DENVER (7/15/15)--Anne Cochran, president/CEO of the Louisiana Credit Union League, accepted the position of board chair for the World Council of Credit Unions during the group’s annual general session Tuesday in Denver.

Cochran, who will be the first female chair of the board, succeeds outgoing Chair Grzegorz Bierecki, president/CEO of Poland’s National Association of Co-operative Savings and Credit Unions. 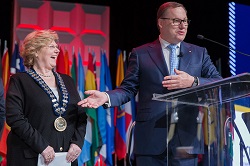 "My passion for the credit union movement in the past 15 years has helped me to represent World Council in many arenas, from management certification programs to training at global conferences to working with universities in Ecuador, Moscow and Nairobi," Cochran said.

Patrick Jury, president/CEO of the Iowa Credit Union League, will serve as second vice chair on the board.

Other executive committee members are:

Newly elected board members include:

For more conference coverage, including keynote speakers and breakout sessions, visit news.cuna.org/acuc or search Twitter for the #CUinDenver2015 hashtag.