DURHAM, N.C. (7/21/15)--Latino Community CU (LCCU) is marking its “quinceañera,” or 15 years of service to underserved and immigrant members in the Durham, N.C., area with some numbers that show a successful credit union can have a social mission, according to LCCU’s annual report.

In many Latin American countries, “quinceañera” is celebrated when a girl turns 15 as a passage from adolescence to maturity. 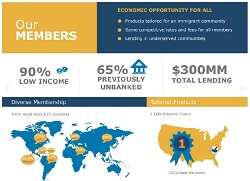 LCCU organized in 2000 after several high-profile robberies of Latino immigrants in Durham. It became a vehicle for immigrant populations to safely save money while receiving financial services. Today it is a full-service financial institution with 11 branches.

But these statistics don’t fully tell the story.  For 45,000 of those members, the credit union is their first experience with a financial institution. Ninety percent of its members are low income.

LCCU’s goal is to “help members move along the financial continuum and integrate into the financial system,” said the report. It does so by practicing inclusive lending and emphasizing financial education. Seventy percent of its mortgages go to first-time homeowners. Roughly 24% of its personal loans are secured, while 53% of those personal loans are microloans.  About 38% of all loans are to people with “alternative credit histories.”

The credit union conducts 140 workshops a year, with an attendance of 13,000. The workshops have doubled the impact on members’ finances.  Graduates saved $3,394, compared with $1,810 saved by other members. Sixty-nine percent of graduates opened checking accounts, compared with 38% of other members.  Twice as many--6% vs. 3%--took out mortgages. Ditto for direct deposits--36% of workshop graduates vs. 18% of others.

“Over the last decade and a half, the credit union has grown together with our 60,000 members,” said CEO Luis Pastor and Chairman John Herrera in a joint letter to LCCU’s membership. “Thanks to our members, partners and supporters, we have become a self-sustaining institution that is able to offer economic opportunity for all.”