CUs have much to celebrate, as their total memberships now top the 103 million mark.

Credit unions have much to celebrate, as their total memberships now top the 103 million mark. But that group still represents just one in three American adults, according to CUNA’s 2015-2016 National Member & Nonmember Survey.

But millions more are ripe candidates. In a recent BancVue survey of 1,000 adults:

• Two-thirds say they prefer to use a credit union or community bank, instead of a big national bank.

• But only 23% of big bank customers actually looked into what it would take to make that switch.

Why won’t more switch? They give two chief reasons: They lack awareness of these local financial institutions, and they believe they can’t receive products they need.

How millennial members find CUs 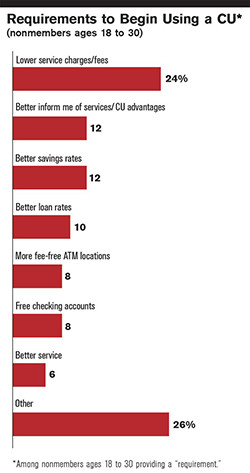 Using parents as the conduit for these stories is an important strategy, Haller points out. That’s because CUNA’s survey shows that 21% of respondents initially became members because their parents signed them up.

“The message to credit unions is to reach out not only to young adults, but also to show their parents how you can help their teens with savings plans or their young adult children with loan products,” Haller points out.

The next two reasons these members give for joining a credit union are good interest rates (14%) and low fees (10%). And a combined 13% say they joined in response to a recommendation from a friend or employer.

Haller says that a small percentage of these young adults said they joined a credit union because they trusted their credit unions more than their banks.

That’s somewhat surprising, he notes, in light of what’s been happening in the banking industry in recent years—yet not when you consider the awareness issue. A huge opportunity exists to emphasize your role as a trusted financial partner exists, Haller says.

To support that claim, Bristowe says PSCU monitored tens of thousands of mentions of the word “bank” on social media for a 30-day period. In those messages, the word most associated with “bank” was “hate.” Others popping up often included transfer, wrong, obnoxious, and stole.

“Collectively, credit unions are the alternative millennials so desperately seek,” Bristowe writes in CUNA’s E-Scan. “The problem is, they’re largely unaware you exist,” he says, adding PSCU research shows 71% of millennials say they have little or no knowledge about credit unions.

NEXT "Show nonmembers the CU difference"