CUs continue to make gradual progress growing their Hispanic membership.

Credit unions continue to make gradual progress growing their Hispanic membership. Today nearly 25% of Hispanics are members, according to CUNA’s 2015-2016 National Member & Nonmember Survey. That’s up from 21% in 2013.

The potential for further growth remains high, says Coopera CEO Miriam De Dios, noting that one in six U.S. residents is Hispanic, and one in two is either unbanked or underbanked. Coopera, a CUNA strategic alliance partner, helps credit unions reach Hispanics (cooperaconsulting.com). 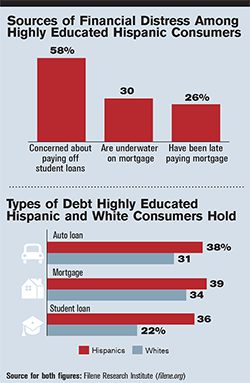 De Dios emphasizes that the Hispanic market is not one segment, but has its own inner diversity. “Sometimes people tend to throw everyone into one group,” she says, “but that’s not accurate.”

Hispanics who are first-generation U.S. residents, for instance, often need basic, introductory financial services, as well as credit-building services. Many are looking for savings or lending products that will help them pay for immigration legal processes.

The second generation of U.S. Hispanics overlaps heavily with the millennial population segment. About 62% of Hispanics are younger than age 35, according to the U.S. Census Bureau, while just 4 7% of the overall U.S. population is younger than age 35. Individuals in this group might be more interested in credit-building products, De Dios points out, and they want guidance on how to maintain good credit. They're also an extremely tech-savvy group.

"They have aspirations to continue on to higher education and to own a business someday;” De Dios says. "Business services and wealth-building services might be important down the road:”

A recent Filene Research Institute study sheds additional light on the financial needs of highly educated Hispanics. Nearly 40% of these individuals can be classified as "financially fragile,” the study finds. They struggle with short- and long-term financial management.

But credit unions can help highly educated Hispanics avoid high-cost borrowing practices and overpriced financial products and services, which often are at the root of their difficulties. Credit unions also can provide balanced financial advice and encourage savings through incentive programs, the Filene study advises.

Greater Iowa Credit Union saw growth after reaching out to the Hispanic market about eight years ago, starting with remittance transfers. Later, working with Coopera, the $330 million asset credit union in Ames, Iowa, offered credit builder loans to help immigrants establish a credit history in the U.S. and accepted individual taxpayer identification numbers (ITIN), in lieu of Social Security numbers, as a valid form of identification for various products and services.

"We want to make sure that we do not create any barriers to our products and services and we keep everything as open as we can,” says John Kenjar, the credit union's vice president of marketing and public relations.

The credit union monitors immigration decisions by the federal government and plans to add more bilingual staff. As it builds trust with Hispanic members, it's cognizant that immigrant families come from many different cultures and have different needs from one generation to the next.

Whether highly educated or less so, whether first generation or second or later, "Hispanics are looking for dignified financial services,” De Dios says. "They're looking for respect when they come into an institution. And when it comes to services, they want convenience and products that save them time and money:”