Discover the Power of Loyal Members

The persistent strength of members’ loyalty level is good news, considering that today’s members have numerous and ever-expanding choices in the financial services marketplace.

Loyal members aren’t just recurrent users of credit union products and services. They’re also ambassadors who bring in new members. And they speak up for the credit union cause on issues on Captiol Hill or in the statehouses (“MAP links loyalty and advocacy,” p. 34).

“But what members say is not always a predictor of what members will do,” says Jon Haller, CUNA’s director of corporate and market research. “When members have so many other options, it takes more than loyalty to keep them going back to their credit union again and again. Top-notch, convenient products and services are crucial.” 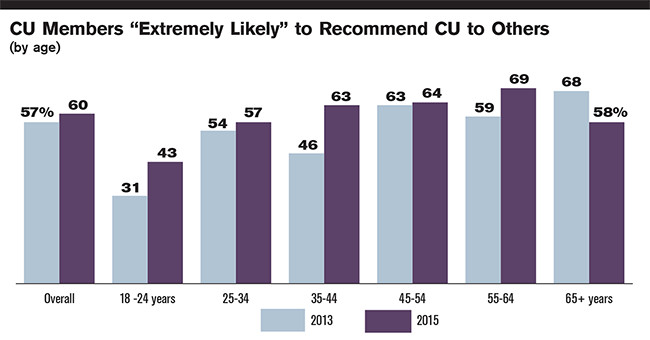 This year’s survey shows that 50% of members say their credit union is their primary financial institution (PFI). That’s down from 57% in 2014.

At the same time, the PFI status for “other” financial service providers—not credit unions and banks—continues to ease upward, from 3% in 2013 to 7% in 2015. This reflects the continuing arrival of new, nontraditional players on the financial services scene.

The survey also shows that being “highly loyal” doesn’t automatically translate into designating a credit union as a PFI. While there is a strong correlation, 40% of highly loyal credit union members choose a bank or other financial service provider as their PFI.

“Clearly, the challenge is to spur more highly loyal members to do more actual business with their credit union,” Haller says.

To measure member loyalty, Haller and his research team used the Net Promoter® model originally developed by Satmetrix®. The survey asked members to respond to a question: “How likely would you be to recommend your credit union to a friend, family member, or co-worker?”

Respondents rated their inclination to recommend their credit union on a scale from 1 (“not at all likely”) to 10 (“extremely likely”). Researchers then broke down the scores into three categories: 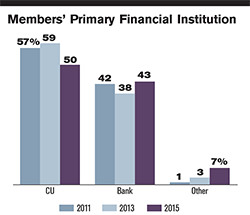 The Net Promoter Score is the difference between the percentage of promoters and detractors.

“Perhaps most noteworthy,” Haller says, “is that credit unions’ Net Promoter Score has outperformed the banks’ score every year since CUNA began monitoring this metric in 2009.”

For instance, in 2013, banks’ Net Promoter Score was a mere 8% (39% promoters vs. 31% detractors), compared with 38% for credit unions (57% minus 19%). “Banks have not recorded a Net Promoter Score exceeding 20% in the past several years that we’ve tracked this measurement,” Haller says.

NEXT "How loyal members use services"