The Credit Unions of Rhode Island presented an $85,000 check to Special Olympics Rhode Island at the conclusion of its Charity Golf Tournament Monday (Daily CU Scan July 21). The funds represented the total amount raised in the year by credit unions, members and sponsors. 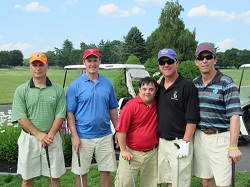 South Carolina FCU, North Charleston, S.C., announced a $10,000 gift to the Mother Emanuel Hope Fund. These funds will be donated directly to the Emanuel AME Church in ways best determined to benefit the church members and the surviving families, who were victimized in a June 17 shooting in which nine people were killed. South Carolina FCU employees and leadership were able to raise the gift through an employee drive and corporate match.

Robins FCU, Warner Robins, Ga., donated $27,000 to Make-A-Wish Georgia to fund three children’s wishes “because granting a wish for a child can have such a huge impact on that child’s life,” said Hillary Bobbitt, Robins FCU communications specialist. In total, Robins FCU has given more than $200,000 to eight local or state organizations as part of their community outreach (macon.com July 20).

Among those who benefited from the latest donation is Macon native Khadijah Brown, appeared as an extra on the set of her favorite TV show, “Awkward.” Besides appearing as an extra on the show, Brown, an 18-year-old with congenital heart disease, met the cast of “Awkward,” received a full hair and makeup treatment and tried on one of the main actresses’ wardrobe. While in California, Brown and her family also stayed in a four-star hotel, rode around in a limousine and were given VIP tickets to Universal Studios Hollywood.

America’s CU, Lewis McChord, Wash., awarded a $1,500 Armed Forces Financial Network matching grant for 2015 as part of AFFN’s Military Community Support Program (The Suburban Times July 17). The combined contribution of $3,000 was donated to the Captain Meriwether-Lewis chapter of the Association of the United States Army, for the second annual Zombie 5K Run.

Hanscom FCU, Hanscom Air Force Base, Mass., donated $25,000 to help treat servicemembers suffering from post-war trauma. The funds will support Run to Home Base, a major fundraiser for the Red Sox Foundation and Massachusetts General Hospital Home Base Program.