The groups traversed Capitol Hill over two days, meeting with North Carolina and South Carolina delegations, focusing primarily on the topics of data security and regulatory relief in discussions with legislators (In the Loop July 23.) 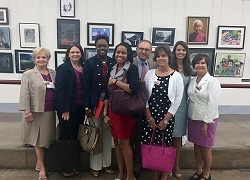 Regarding regulatory relief, since 2008, credit unions have been subjected to more than 190 regulatory changes from at least 15 different federal agencies, resulting in over 6,000 Federal Register pages to review and implement. This level of regulation limits credit unions’ ability to serve their members.

Both versions of the Data Security Act (S. 961/H.R. 2205) strengthen merchant standards to be comparable with those of credit unions, and they mandate a federal notification requirement for merchants when breaches occur. Additionally, each bill provides a floor for data security standards nationwide and includes the important provision to exclude financial institutions from these requirements as credit unions already are subject to rigorous standards under the Gramm-Leach-Bliley Act.