SEATTLE (7/29/15)--When the annual Legislative Summit of the National Conference of State Legislatures (NCSL) starts Monday in Seattle, nearly every aspect of the credit union movement will be there to greet attendees.

CUNA, the American Association of Credit Union Leagues (AACUL), CUNA Mutual Group and Northwest credit unions will raise awareness of credit unions to state legislators and their staff during the four-day conference, which is widely viewed as a bipartisan event. 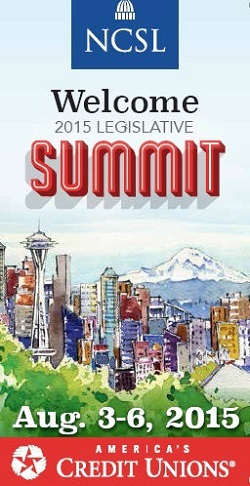 Fourteen 30-by-60-foot banners will be located outside the Washington State Convention Center during the National Conference of State Legislatures conference next week.

At Seattle-Tacoma International Airport, the baggage claim area will display posters and banners reinforcing the credit union difference. Once at the conference, attendees will see America’s Credit Unions volunteers in green T-shirts.

“It is important that state legislators appreciate the credit union value proposition,” said Troy Stang, Northwest Credit Union Association president/CEO and representative of the host city. “Our success in delivering a strong and influential message to these state lawmakers on behalf of more than 100 million credit union members can only be made possible by our own ability to collaborate and support one another in this effort months before the first visitors ever arrive.”

“We’re at a time in history when regulations, legislation and the economy are all exerting undue pressure on credit unions’ ability to serve the best interests of members. Credit unions are turning to us, their leagues and CUNA, for help in easing that burden,” Kenyon said. “This means we work collaboratively and make every opportunity count. NCSL’s Legislative Summit is a great opportunity for us to go to bat for our members to advance the credit union cause.”

CUNA President/CEO Jim Nussle also noted the impact of state legislation and policies on a national level. “State lawmakers often move on to the federal level so being able to help them understand the impact of credit unions on a local level will help us garner their support in Congress,” he said. “It’s also common for laws and policies on the state level to be a testing ground for federal policy. Having a vibrant and innovative state legislative framework helps all credit unions, regardless of charter type.”