WASHINGTON (7/30/15)--In what appears to be a service opportunity for credit unions, 3 out of 4 Americans would prefer credit unions or banks to offer small dollar loans at rates lower than those offered by payday lenders, according to a survey by The Pew Charitable Trusts.

The study indicates there is broad support among Americans for the types of reforms on payday lending proposed by the Consumer Financial Protection Bureau (CFPB), the federal agency with authority over payday loans. 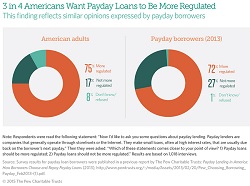 Roughly 12 million Americans use payday loans annually, spending an average of $520 in fees to repeatedly borrow $375.

In March, CFPB proposed a framework for regulating these and similar loans. The Pew Charitable Trusts then conducted polling in May to gauge Americans’ views on payday lending, the key elements of the CFPB proposal, and the types of loans that would be likely to result from it.

Respondents overwhelmingly see as unfair the prices charged for loans currently offered by payday lenders, some of which probably would still be available under the proposed CFPB framework.

About 75% of respondents believe that payday loans should be more regulated; similarly, in a 2013 Pew survey, 72% of payday loan borrowers said they wanted more regulation.

Respondents believe the types of small loans that would probably be offered by credit unions would have fair prices, even though the rates are higher than those for mainstream credit, such as credit cards. For example, 76% viewed a fee of $80 on $500 paid back over four months as fair.

Another Pew report, “The Complex Story of American Debt," explores the growing use of credit among American households. The report provides a comprehensive look at the complex story of American debt--how families hold it, their attitudes toward it and how it relates to their overall financial health.

Debt is particularly problematic for low-income households, whose liabilities grew far faster than their income in the aftermath of the recession: Their debt was equal to just one-fifth of their income in 2007, but that proportion had ballooned to half by 2013. Even middle-wealth households held over $7,000 more debt, on average, in 2013 than in 2001 and previous years.

While 8 in 10 Americans have debt, they are conflicted: Nearly 7 in 10 (69%) said debt is a necessity in their lives, even though they prefer not to have it. A similar percentage (68%) also believes that loans and credit cards have expanded their opportunities.