Corinne Sherman, PCUA senior vice president of fee services, was interviewed at PCUA headquarters by WGAL-TV for a news feature on the transition from magnetic strip to EMV chip-card technology on plastic cards. 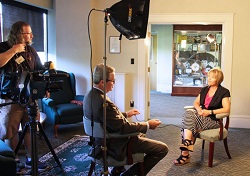 The feature aired in the Harrisburg-Lancaster-Lebanon-York region Wednesday evening.

During the interview, Sherman spoke about the security features of chip technology, as well as the liability shift between issuers and merchants scheduled for October.

Both Sherman and WGAL-TV consumer reporter Brian Roche reiterated that under the current magnetic strip as well as with the chip technology, consumers have zero liability for card fraud as long as they report it in a timely manner.