ATLANTA and COSTA MESA, Calif. (8/3/15)--Credit reporting agencies Equifax and Experian recently looked at the where and who of credit card debt.

The latest national consumer credit trends report from Equifax showed total credit card debt rose to $634 billion at the end of the second quarter, a 5% increase compared with $604 billion a year ago.

In metro areas hit hardest by the housing market crash, the rate of growth in credit card debt more than doubled year over year. It more than tripled in other cities less affected by the crash. This suggests that consumer confidence in the American economy is growing across the board, Equifax said.

In each of the nation's top 25 metro areas, consumers added credit card debt by at least 3% in 2015 compared with a year prior. This is a marked contrast to the second quarter of 2014, when just eight of the top 25 markets saw as much as a 3 percent gain over the previous year.

"Every major market has seen increases in credit card debt, even those cities where the housing market issues are not completely resolved," said Assad Lazarus, interim unit leader of Equifax Personal Information Solutions. "This shows that American consumers are more confident about their financial futures, and that means the U.S. economy has entered an expansion mode." 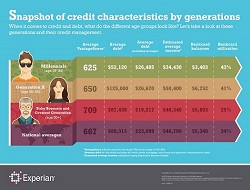 Thin credit histories,a deficit in credit knowledge and coming of age during challenging economic times may be holding back millennials, however, Experian noted.

The study revealed that millennials’ average credit score is 625, and the average debt--excluding mortgages--is $26,485.

“While this generation may not look like they are on the right track financially, it’s important to keep in mind that credit scores are built on credit experiences, and while this generation has been slower to use credit, they have plenty of opportunities to build a positive credit history,” said Michele Raneri, vice president of analytics and business development. “The best way to do that is to understand credit before using it.”

“We’re seeing that millennials are purchasing cars at a much earlier point in life, which is giving them the opportunity to build credit a little differently than previous generations,” said Rod Griffin, Experian’s director of public education. “This is a critical time for members of this generation as they are learning to use credit as a tool.”