STURGIS, S.D. (8/7/15)--Hundreds of thousands of motorcycle enthusiasts are motoring around the Black Hills area of South Dakota this week for the 75th annual Sturgis Motorcycle Rally, which runs through Sunday. For one credit union, the event brings a change of routine. Northern Hills FCU’s main office sits right on Main Street in Sturgis--the heart of the rally.

“There is a steady roar of motorcycle engines throughout the day and night all this week,” said Marty Willms, Northern Hills FCU vice president of operations. “This year, the traffic began even before the rally started as motorcyclists were arriving in the Black Hills the last two weeks of July. Traffic has gotten more congested with each passing day, and at times is at a complete standstill.” 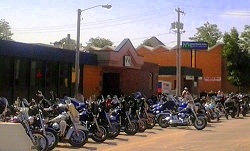 During the rally, it can take as long as two hours to drive seven blocks and back through the steady stream of motorcycles and pedestrians. For those living outside of the city limits, it can take up to an hour just to get to the interstate exit, normally a 10-minute drive.

Sturgis has roughly 6,700 residents, but during the rally, the population explodes. In fact, the rally attendance nearly doubles the population of South Dakota’s entire population. So how does one credit union cope with the unusual atmosphere, stress, and extra demands of being a financial institution in the heart of a biker event?

To start, Northern Hills FCU adjusts its schedule at the Sturgis office to better accommodate their members and staff by opening the drive-thru at 7:30 a.m. and the lobby at 8 a.m. and closing both early at 3 p.m. Normal hours are 8 a.m. to 5 p.m.

Members appreciate the earlier hours so they can take care of their business before the crowds return. “Our drive-thru has seen the most business from members this week, with foot traffic in the lobby consisting mostly of nonmembers conducting shared branching transactions,” said Willms. “Needless to say we see a ‘colorful’ cast of characters both inside our lobby and outside our front doors.”

The ATM at Northern Hills FCU also sees a large amount of traffic during rally week. Staff reloads the machine every other day instead of the usual twice-weekly routine. Cash loads are also increased more than three times the normal load. In addition, the credit union places a temporary ATM in its Main Street vestibule, which sees a good amount of traffic as well--even with the increased fee of $6 per transaction to cover the credit union’s expenses.

On a fun note, the staff dresses in rally attire throughout the week to better blend in with the crowd. To promote the spirit of the rally, the credit union provides lunch for the Sturgis staff on several occasions and also allows staff to take short breaks to watch events near the credit union. For example, the staff watched B-1 bombers as they flew directly over the credit union Tuesday.