Half of global card fraud occurs in U.S.: Nilson

CARPINTERIA, Calif. (8/10/15)--More than $5 of every $100 spent worldwide last year was spent fraudulently, according to a recent report from Nilson.

Roughly $16.31 billion worth of fraud losses were incurred by financial institutions and merchants on all types of payment cards across the globe in 2014, a number equal to 5.65% of the $28.844 trillion in global card volume seen during the year. 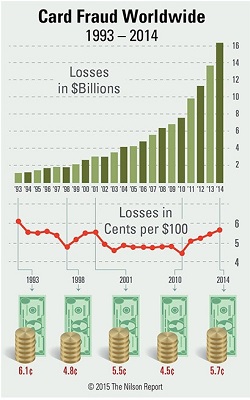 The report also found that nearly half of all gross card fraud losses occurred in the United States in 2014, despite the country only producing 21.4% or $6.187 trillion of the total volume. This equates to $12.75 out of every $100 spent being fraudulent.

David Robertson, who published the report, said multiple factors contributed to the disparity between the United States and the rest of the world. Though, he said, EMV adoption played a large role.

While CUNA acknowledges the importance of implementing EMV technology, the trade association maintains that what must take place is a layered approach to payments security, which includes both EMV-chip, encryption and tokenization technology.

Further, CUNA says that until merchants are held to the same strict data security standards that financial institutions must uphold, the payments network will never be entirely protected.

You're One Smart Cookie--You Use Your CU Credit Card

ID Theft: How to Prevent It and How to Get Over It statement stuffer