CHICAGO (8/12/15)--Credit unions are capturing a greater share of the mortgage loan market while continuing their strong performance in auto lending, according to new TransUnion research. Credit unions’ share of all mortgage originations has increased to 11% in 1Q 2015 from 7% in 1Q 2013.

In the past year credit union mortgage originations increased 35%, compared with a 15% increase for the rest of the market. 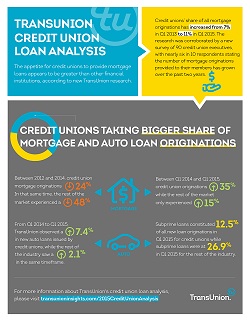 In the survey of more than 90 credit union executives, nearly six in 10 respondents stated the number of mortgage originations provided to their members has grown over the past two years.

“Mortgage originations had declined substantially across the board in the last few years; however, the decline had been less dramatic for credit unions,” said Nidhi Verma, director of research and consulting in TransUnion’s financial services business unit. “In the last year alone, it appears significantly more credit union executives are seeing growth in this area. Credit unions are becoming bigger players in the mortgage loan market, something that may serve them well in the future as the housing market continues to recover.”