Ill. league takes 500 CU advocates out to the ball game

The event marked the second straight year the league hosted Illinois Credit Union Day at U.S. Cellular Field on the South Side of Chicago. 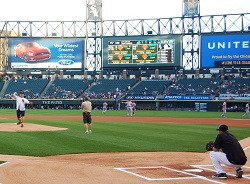 “This event was a tremendous opportunity to highlight Illinois credit unions,” said Tom Kane, ICUL president/CEO. “With more than 100 million members, credit unions will continue to utilize high profile opportunities like this to tell their story of how they make a difference every day in the lives of their members.”

Prior to the game, Joe Lyons, former state lawmaker and volunteer board member of Credit Union 1, Rantoul, Ill., threw out the first pitch.

Lyons most recently served as a state representative for the 95th House District; he now works with the league as a key advocate for the state’s credit unions in the Illinois General Assembly.