Williams, who played his college ball at Duke and was drafted No. 2 overall by the Chicago Bulls in 2002, met Visions President/CEO Ty Muse at a celebrity basketball camp several years ago, and the two discovered they both strongly value financial literacy. 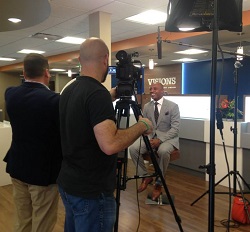 “It was one of the things that my parents made sure that I understood and learned about on a daily basis by having difficult conversations about what things I was going to do with my money, and we wanted to make sure that these opportunities were accessible for other kids,” Williams said (Binghamtonhomepage.com Aug. 12). “Not just minorities, but kids of all facets to learn about a financial literacy plan and to become disciplined with their finances.”

Williams, who was introduced at a ribbon-cutting ceremony outside a newly renovated branch of the Endicott, N.Y.-based credit union, will appear in future Visions marketing efforts and also at select events at locations across the credit union’s footprint, which includes New York, Pennsylvania and New Jersey.

In his new role with the credit union, Williams hopes to instill in kids the importance of thinking about finances, even at a young age.

“You say, ‘OK, you’re going to be the first pick taken in the draft, how much are you going to get?’ Kid has no idea,” Williams said (WBNG-TV Aug. 12). “You talk him through all the things he wants to buy, and you start talking to him about taxes, you start talking to him about paying your agent fees. It’s those kinds of conversations that get those kids to think about business and about their life and about money.”